Sing is a film, basead on a song, talk about Koala, have a theater and opening hearings for a singing competition.

The film screenplay was writen and the directed by Garth Jenning. The film stars with a Buster Moon, it’s a Koala, the Mike, it’s a mouse, the Ash, it’s a hedgehog, the Meena, it’s a elephante, the Johnny, it’s monkey, the Eddie, it’s the best friend of the Buster Moon , the Nana Noodleman, it’s a rich lady who several years ago song in the theater of Buster Moon, the Rosita and the Gunter they are a pigs.

The story is about a one Koala, Buster Moon, since small wanted have a theater, but now days have the theater have some difficulties, so the Koala open the competitions of Music, all competitors he chooses five, Mike, Ash, Meena, Johnny and Rosita/Gunter (group) but the theater is flooded, because the floor part of the stage was composed with water and squid to iluminat, wich broken down. Whatch the movie to see how the story end !!!!!!

The action starts in USA and the film is set in English.

The plot is really exciting, fascinanting, beautifull and musically.

I truly recommend it because conveys a very beautiful message that it is not because we feared something is wrong that we should give up. 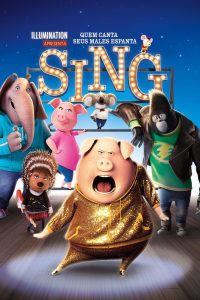 Trailer of the movie: