My dream is  to make people stop being prejudiced against white people, black people, homosexuals  and others.

I learned that Martin Luther King was a fighter, humble and mostly thought about other people. He was the leader of demonstrations to prove that black or white people should not be treated differently or be despised because of the colour of their skin. All human beings must be treated in the same way.

The thought of Martin Luther King I liked the most was « We must build dikes of courage to hold back the flood of fear» because, if people have confidence in them, it’s easier and they will not be afraid of saying what they think and of fighting for what they believe is right.

My hope for the World is that one day people accept that we do not have to be all the same but it’s good that we are all different because that’s what makes us special. So we should accept and respect our differences. 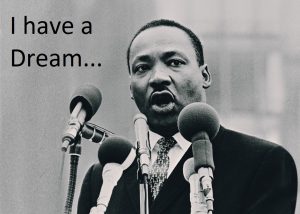